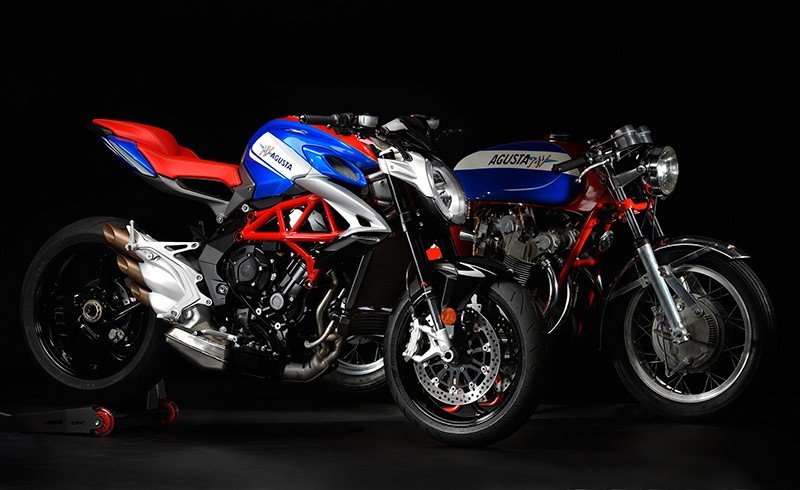 Celebrating the long history and relationship between MV Agusta and the USA, MV Agusta introduces the special edition 2017 Brutale 800 America. Based on the highly acclaimed new three-cylinder Brutale 800, the America edition pays tribute to the classic America range from the 1970’s.

To define the America, the MV Agusta design team wanted to match the exuberance of the country that bears its name, in a special livery. From its rich culture, individuality, patriotism, innovation and the United States flag, the team set about bringing the passion of these elements into a never-before-seen metallic blue color scheme that catches the light with a shimmering iridescence. Whilst on the tank, a star-studded motif, like the one on the 1973 MV Agusta 750 S, takes the brand back to its glory days. Elsewhere, gloss black paintwork brings out the best in component details, such as the front fender, which sports the MV Agusta logo.

Other reminders of the rarity of the motorcycle are found on the rear fender and side radiator panel with decorated ‘America Special Edition’ logo. Even the America’s red seat has been specially designed to incorporate the livery theme, using gilt stitching to compliment the finish of the tank.

Limited to a production of only 50 units to match the 50 states of the USA, the pure exclusivity of the motorcycle can be seen in the triple clamp with the laser cut sequential production number, alongside the ‘America Special Edition’ logo. The same number can also be found on a specially framed certificate of authenticity that comes with each motorcycle.

Based on the new 2017 Brutale 800 Euro 4 platform, the Brutale 800 America offers all of the latest technical specifications and will go on sale in the USA, July 2017.

The official and world-first unveiling of the Brutale 800 America will take place following the 4th of July Independence Day celebrations at Laguna Seca, California, for Round 8 of the World Superbike Championship, 7-9 July, 2017. Industry and customers can be the first to witness the special edition at the MV Agusta stand, with the chance to meet the MV Agusta Reparto Corse team and check out the latest model range.

MV Agusta is pleased to announce the official launch of RVS, Reparto Veicoli Speciali, the new “Limited Run” Division of […]