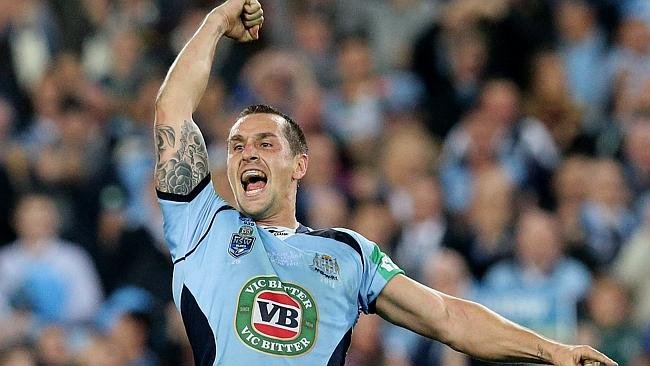 Laurie Daley has hailed NSW’s drought-breaking State of Origin win as the highlight of his glittering career.

Daley became only the second man after Wayne Pearce to play, captain and coach a Blues side to a series win over Queensland and the 44-year-old said the experience of watching his side hold out the Maroons 6-4 to win a a first series in nine years eclipsed anything he achieved as a player.

‘It’s an amazing feeling; our supporters have been disappointed for last eight years,’ Daley said.

‘We didn’t play well but our courage and will to win and inspire one another was enormous.
‘As a player, when the kick off happens, you’re not nervous – you have a different adrenaline rush.

‘But to see those blokes and how they’ve prepared to win is better than anything. It’s a better feeling as a coach than a player.’

Trent Hodkinson’s try and conversion seven minutes from time sealed the win in front of a crowd of 83,421 – which was just shy of the biggest at ANZ Stadium since the Sydney Olympics in 2000.

The Canterbury halfback became the first Blues No.7 to taste victory against Queensland since Andrew Johns and skipper Paul Gallen admitted he was struggling to express his feelings after leading the side to victory.

‘I am a bit numb at the moment. There are a lot of emotions, happiness, relief – bit lost for words,’ Gallen said.

‘We still haven’t played that well but we’re tough. But who cares? We won!’

The Blues had to withstand a final rally from the Maroons with 12 seconds left on the clock after they conceded a penalty that gave the visitors possession and Gallen admitted he feared the worst.

‘I honestly didn’t think we’d won it until Haynesy got the ball and kicked it dead at the end,’ he said.

‘I was shing myself, Billy (Slater) was running and someone brought him down thankfully.

‘I am just glad the penalty wasn’t on the other side. I wouldn’t have wanted to see (Greg) Inglis get the ball at the end.’

Queensland coach Mal Meninga had nothing but praise for his players and said their eight straight Origin successes would never be seen again.

‘For me, I am so proud of what these players have achieved over the years and won’t be repeated again,’ Meninga said.

‘We’re not going to make excuses or criticise. We’ve lost 2-0 and have to go to game three and make amends.’

Meninga also laughed off suggestions he might need to rebuild his side after tasting (a series) defeat for the first time since taking over as coach in 2006.

He also said the decision to disallow Sam Thaiday’s try changed the game and was an incorrect ruling from the officials.

‘Give this team some praise; we’ve lost one series in nine; let’s give these guys credit,’ he said.

‘We dominated for 60 minutes and, when we don’t get the try with Sam, we maybe lost composure.

‘We pride ourselves on never giving up and play to the 80th minute. These boys tried their backsides off.

‘I thought Sam’s try was a try. He was stripped and regathered – it was a try.

‘But we’re not going to offer excuses.