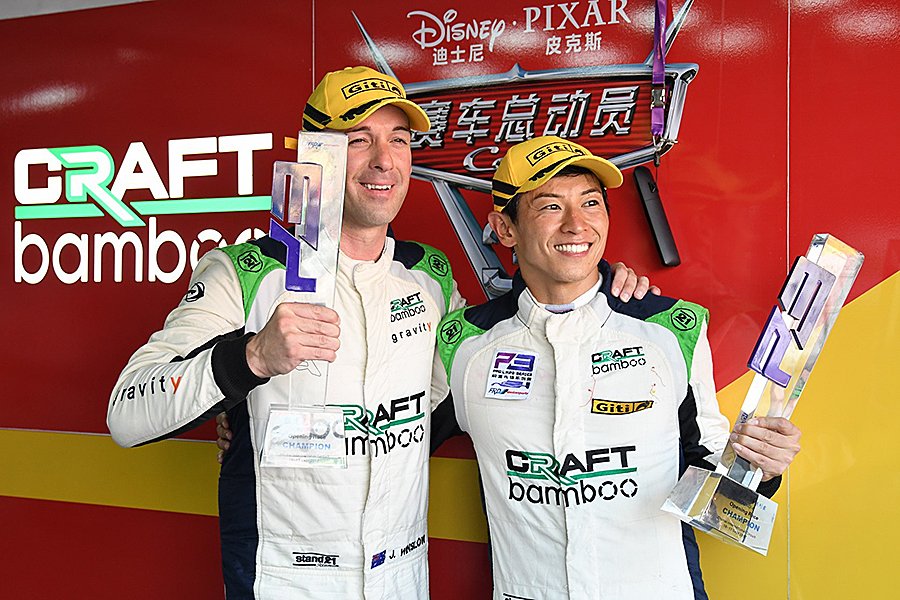 Craft-Bamboo Racing has won both the FRD LMP3 Series drivers’ and teams’ championship titles. The #95 Ligier of James Winslow and Hiroki Yoshida took the win in race one and a third-place podium in race two. This allowed James Winslow to be crowned the sole drivers’ champion and have Craft-Bamboo claim the teams’ championship title with 116 points, nine points ahead of second place. The #20 Ligier of Alex Tagliani and Greg Taylor also had a great start to the weekend, taking their first podium of the year in race one with third place but unfortunately the pair had to retire the car in race two on Sunday. Thanks to Craft-Bamboo’s drivers’ and teams’ championship title victories, the team will be given free entry into the 2017/18 Asian Le Mans Series with an LMP2 car provided by Ligier.

Hiroki Yoshida got his first FRD LMP3 Series race underway in the #95 from P6 on the grid and executed a good rolling start to charge into P4. Yoshida was demonstrating excellent pace from the start and soon found his way into P3 in chase of the lead. With 15 minutes gone, the Japanese driver had managed to take another place and slip into P2, only eight seconds behind P1. With his stint finished, Yoshida completed the driver change to James Winslow who rejoined the race in P1 after the pit stop shuffle was over. Winslow put in another unstoppable performance over the final 20 minutes of the race to edge out a gap of 6.7s and take the #95 Ligier to its fourth win of the season and put them in a strong position to take the championship on Sunday.

Greg Taylor made an excellent start from P8 in the #20 and carved through the field to take an incredible six places and put him into P2. Greg was being challenged from behind but was doing a fine job of keeping his competitors at bay over the coming few laps. Unfortunately, a slight error forced him to lose position and drop down to P5 where he would then hand the car over to Alex Tagliani. Thanks to Greg’s good pace over the latter part of his stint, Tagliani was able to rejoin the race in P3 and put the #20 in line for its first podium of the season. The Canadian put in a flawless stint, keeping P4 at a good distance and expertly guiding the #20 to a P3 podium.

It was up to James Winslow to kick off the final race of the season and the team needed to secure a P6 finish or higher to take both championship titles. Winslow performed admirably on the start by going from P6 to P4 and he settled into a groove, knowing he had to play it safe but also maximize his performance. He had a faultless stint and brought the car into the pits in P4 to hand over to Hiroki Yoshida for the nail-biting last stint of the season. Yoshida was able to slot into P3 for the final twenty minutes of race two after the pit stop window had closed. The #95 driver was closing fast on P2 and made a clean pass up the inside to slip into second place with 16 minutes left. Yoshida kept out of trouble from here on out before being challenged from behind by a fast charging Gamet Patterson in the #3. Not risking the championship in the last four minutes, Yoshida didn’t make it difficult for him to pass and slipped back to third place before crossing the line a couple of laps later to secure both championship titles after a perfect stint.

Alex Tagliani started the final race of the season from P7, just behind the #95 sister car and he was able claim a position within the first lap of the race. The #20 driver put in a solid stint until the pit window opened, keeping ahead of the competition and maintaining his P6 position throughout. Greg Taylor got back out on track in P5 on his march to the finish but was struggling with a brake issue, which was hindering his ability to maximize the car’s performance. Taylor was dealing with the issue but with 15 minutes remaining a slight excursion off the circuit caused him to get bogged in the grass and forced the team to retire the car.

“We are delighted to have won the FRD LMP3 Series drivers’ and teams’ championship titles. It was a huge effort for the team to get stuck into a discipline that we hadn’t done before but we learnt a huge amount very quickly and we are very proud of each person who was involved. As a company, we have a huge taste for it now and are actively seeking opportunities in the LMP2 and LMP3 classes in the upcoming Asian Le Mans Series.”

“Race one went to plan, my new co-driver Hiroki and myself had a comfortable race after Craft-Bamboo gave us a good race car. The car worked well over the duration of the long race and helped us to take a comfortable first place, which was critical for our championship points. The focus now is looking to seal the title for Craft-Bamboo in race two.”

“I am very glad to be able to win the race. I would like to thank James and the team, splendid machine and a splendid race. The team competes for the championship this weekend and today’s race win was very important. I will do my best to help take the championship title tomorrow.”

“It was bittersweet weekend for the #20. Greg did a mega start and drove really well to help us take our first podium of the year. Unfortunately, we did start to have some issues with braking performance in race one, which continued on Sunday.”

“The pace of the car was fantastic and the guys really nailed the setup. I had a great start and was really able to use the pace of the car early on. I made a small mistake but pushed on for the rest of my stint before handing over to Tagliani, who did a great job to get that third-place podium.”

“After qualifying two tenths off pole position with some braking problems in qualifying, we quickly moved forward from 6th spot at the start of the race, I was determined to keep out of trouble and continue our cautious title winning weekend approach but also make up some key positions so that Hiroki had less pressure in the final stint of the championship deciding race. The race went 100% to plan and after catching third place we held position until the pit stops and Hiroki brought the car home in third to wrap up the 2017 FRD LMP3 drivers’ and teams’ championship for Craft-Bamboo Racing. The team have been amazing all year, zero mistakes, always fast and we always finished well, alongside Mathias Beche and Hiroki Yoshida we were on the podium seven times from eight races and won four out of eight races, which really showed the strength of the entire team. It has been one of the most enjoyable seasons of racing and I would like to thank every single member of the team and a huge thank you to Craft-Bamboo Racing for the opportunity and winning the title in the team’s Lightning McQueen Disney livery feels very special.”

“The braking issue became worse on Sunday and we couldn’t maximize the performance of the car in race two. It was becoming increasingly harder to slow the car down and all our time lost was under braking. When Greg hopped in the car, it was too difficult to drive. It was a shame because I think we could have scored a double podium for both races. Bittersweet but really happy to have the team grab the championship titles.”

“It was a really unfortunate way to end the last race of the season given the pace we had in race one. Alex did a good job in the first stint to get us within reach of the podium but I had a small slip up that caused the car to get beached and we couldn’t continue the fight. I have had a fantastic season with Craft-Bamboo and I thank them for the fantastic opportunity.”