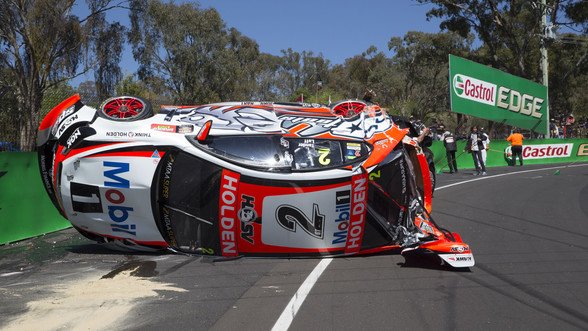 When V8 Supercars veteran Craig Lowndes saw the Holden of former co-driver Warren Luff on its roof, he feared the worst.

“He had his leg wrapped around the steering column,” said Lowndes, who was on the other end of the spectacular crash during Saturday practice for the Bathurst 1000.

“I didn’t know whether he’d broken his leg.

“Once we got his head in an area where he could look around, because he was quite restricted, he untangled his leg and we got him out.”

As soon as Luff crawled out of Holden Racing Team’s wrecked No.2 Commodore, Lowndes gave him a lengthy hug.

“Obviously it was a more scary moment for him than me – I just went in backwards. Getting turned around like a washing machine is a little bit different,” Lowndes said.

HRT were forced to withdraw the car from Sunday’s Great Race because of the amount of damage to its roll cage, ending Garth Tander and Luff’s chances of a victory.

Podium finishers at Sandown, they had been among the frontrunners and were set to battle it out for pole position in the Top 10 shootout later in the day.

“I’m fine, just obviously very disappointed for the team and obviously for Craig and those guys up the road,” Luff said.

“Big thanks to Craig for helping me get out of the car, that was great.”

Luff said he floored his brake pedal heading into turn two on the Mount Panorama circuit, but the car wouldn’t stop.

The Commodore was thrown sideways, into the tyre barrier and onto its roof.

Luff clipped Lowndes’ Red Bull Racing Commodore on the way, sending it into the concrete wall and destroying the rear of the car.

The championship-winning team managed to repair the mostly-cosmetic damage in time for the shootout, qualifying in sixth for the race.

Lowndes and Luff were co-drivers at Red Bull last year, winning the Enduro Cup with podium finishes at Sandown, Bathurst and Gold Coast.

Luff was later dropped by the team to make way for Steven Richards – who won the 2013 1000km classic with Ford Performance Racing’s Mark Winterbottom.

The frighteningly fast mountain claimed two other victims during qualifying on Friday, with championship leader Jamie Whincup and FPR’s David Reynolds both crashing.