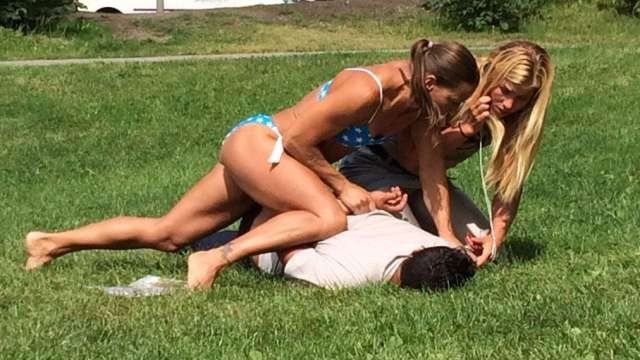 If there was a Police squad who’s standard uniform was a bikini, you’d expect that to be either in California, on set of Hawaii 5-0 or in Sweden! And you’d be almost right! For although there was a legal arrest made, and although the cop at the time was dressed only in bikini, she was at the time off-duty.

When local police officer Mikaela Kellner decided to go sunbathing in a local park in her home town of Stockholm, the last thing she expected was to be called to duty.

But being as committed as she is, she took an immediate leap into action.

Kellner was with friends when a man approached them selling newspapers. When the man left, one of her friends noticed that she was missing her mobile phone.

Kellner and a fellow police officer gave chase and caught the man nearby.

‘My first intervention while wearing a bikini during my 11 years as a police officer,’ she wrote on her Instagram account.

Kellner mentioned to local newspaper that she had no issues with making the arrest despite being dressed only in bikini.

‘If I had been naked I would have intervened as well,’ she said.

A bikini clad police force ? Not really that bad an idea is it ?