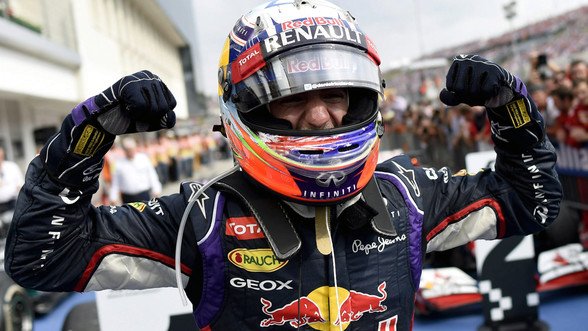 Australia’s Daniel Ricciardo overtook Ferrari’s Fernando Alonso to win a thrilling Hungarian Grand Prix, his second Formula One victory of the season and his career.

Ricciardo, driving for Red Bull and competing in his fourth Formula One season, made three pits stops – compared to just two for Alonso and Hamilton – and his newer set of tires paid off in the end as he surged past the leaders with three laps to go.

“We had the fresher tires but I knew it was going to be an exciting finish,” Ricciardo said.

“That was a lot of fun, the last few laps.

“I am definitely going to celebrate tonight, party for a few days and enjoy a few days off,” he added.

Ricciardo won his first F1 race at the Canadian Grand Prix in Montreal in June.

Rosberg still leads the championship with 202 points, followed by Hamilton with 191 and Ricciardo with 131.

Mercedes told Hamilton to let Rosberg pass him as the race was winding down, but Hamilton said he saw no reason to obey team orders considering his good position at the time.

“I was very, very shocked that the team would ask me to do that,” Hamilton said.

Rosberg “did get close enough to overtake but I was never going to lift off and lose ground to Fernando or Daniel to enable him to have a good race”.

Hamilton also started from pit lane at last week’s German Grand Prix and moved all the way up to finish third.

The British driver said his last two performances were “definitely much more satisfying” than even a win achieved from pole position.

A rain shower just before the start made conditions difficult at the beginning of the race.

The championship continues after the summer break on August 24 with the Belgian Grand Prix in Spa-Francorchamps.

Pic of the Day; Summer Ross features in Edition 53 – The Royal Edition

Pic of the Day ; Courtney Piercy