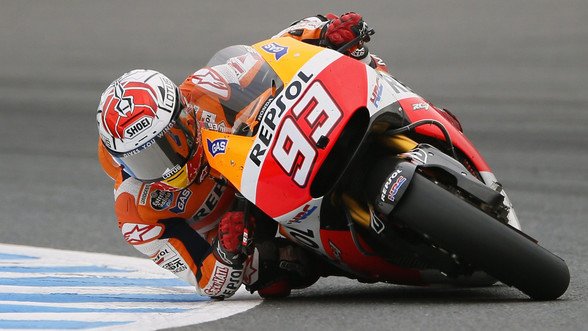 There’s just no letting up from MotoGP champion Marc Marquez.

Just a week after claiming his second MotoGP crown – at the Japanese Grand Prix, Marquez has claimed a record-equalling pole position for Sunday’s Australian GP.

Challenged by the elements and the field during a tricky qualifying session, Marquez had no equal on Phillip Island.

As the prospect of rain forced riders to post strong times early in qualifying, Marquez obliged with a sharp 1:28.850 time to lead allcomers.

Front position on the grid gives Marquez a slice of MotoGP history, equalling Casey Stoner’s record for most pole positions in a year.

It also sets him up nicely to match Mick Doohan’s record of 12 wins during a single season.

The Honda rider said to achieve the feat at Doohan’s home track would be fitting and humbling.

“It will be nice to achieve here because it’s Australia, his country. It would be nice to do,” he told Speed TV.

“I will try to take the risk to win the race.

“The records are always important, especially when people compare you with legends.”

With the championship off the table, attention has turned to a three-way battle for second place between Lorenzo, Dani Pedrosa and Valentino Rossi.

An unlikely rags to riches tale looked possible for Pedrosa after he finished 11th in practice and was sent to an extra qualifying session for slower riders.

The Spaniard used the enforced extra practice to good use, at one stage sitting atop the time sheets before settling for fifth, ahead of Rossi in eighth.

Lorenzo said he was happy with the front-row start as he looked to repeat his 2013 Australian Grand Prix triumph – and make it three race wins in a row this season.

“This normally is a track of Ducati,” he said.

“My target was to push the limit to make the best lap I could; third place is good for tomorrow.”

In the supporting Moto2 division, Esteve Rabat has continued his weekend domination of the Phillip Island circuit by claiming pole.

Rabat can wrap up the Moto2 championship in Australia with a win and other favorable results.

Valentino Rossi can’t add a seventh MotoGP championship to his storied career this season, but he shows he still has […]

After a long summer break, the MotoGP paddock roared to life once again in the Styrian Alps, as the Red […]